What do you get when you find a large, steep hill, cover it with flexible, long advertisement sheeting, and add a large hose of water? Why, a super steep, fast slip n slide! 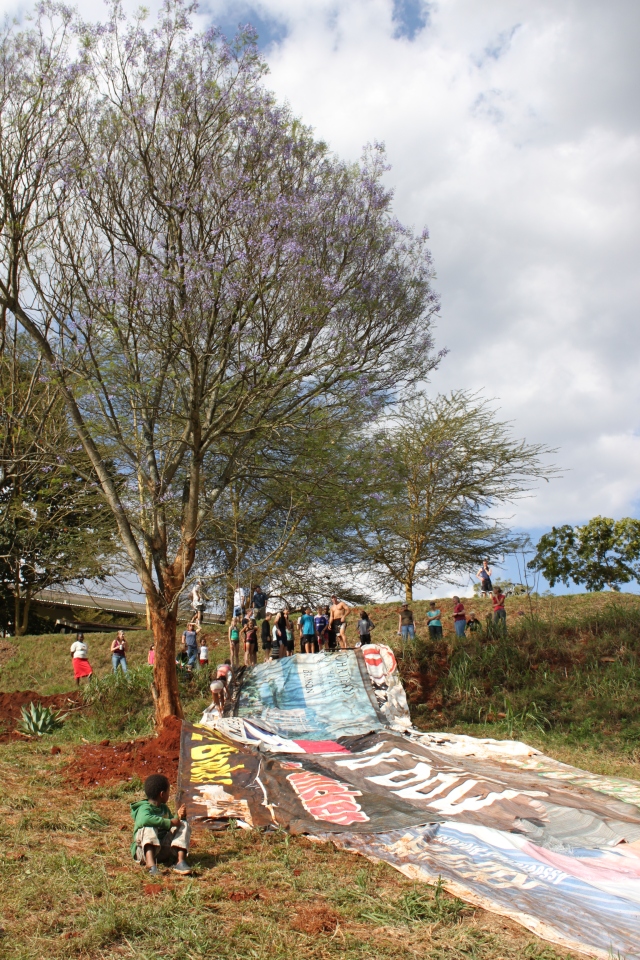 We were invited to try out a slip n slide that another teacher had put together last week. The goal was to see how to improve it for when the high school students use it next week. We were told to wear bathing suits or old clothes- something you can plan to get very wet and muddy in. I heard the plans and thought it may be fun to try and get some photos of the event as well. 🙂

Well, families from school began congregating around 3pm on Monday to check out the slide and see how it worked. It began at the edge of a drive that goes around the back of our school campus and quickly descended into the valley below, still on school property. It was large enough to make my mind say, “Oh my, that is quite the slide!” Bigger than any other slip n slide I had seen before. It even had a “catching pool” at the bottom of the slide!

Those that had already been down were making comments like, “It’s great!”, “So cool!”, “Watch out for the bumps. They found a head of a shovel under one of the advertisement tarps.”, “You have got to try it!”, “It’s a bit rough, but fast and fun!”

So, after watching others try it for a while, both Karen and Anisa gave it a turn. They braced themselves for the bumps and speed and pushed off at the top. Whoosh, down they went with a primal yell and look of excitement and terror! The look on their face on the way down was in a constant state of change depending what was happening to them at the time.

Shortly after Anisa and Karen gave it a try, John decided to give it a go. He whooshed past me at a high velocity, went bumpity, bump down the path and ended with a mighty splash at the bottom! Some people were finding it difficult to stay on the path at times and ended up getting more than their fair share of the rough spots, but John was able to stay on the path the whole way down. Very impressive!

Quite a number of ideas were tried out to see what gave the best ride. Some were going down in the sitting position, others laying on their back, some with extra liquid soap, a few people tried a short running dive onto the slide, others used pool kick boards to sit or lay on, one wore a plastic bag on their bottom over their clothes, some chose to go down together while sitting to make a train, etc.

Each participant was encouraged to go down the slope by those watching. Then as the person reached the bottom pool of water there was the appropriate exclaim of ooh or ahh, depending on the amount of bumps the person endured, the “air time” had before entering the final splash, or the type of splash created by their entry into the waiting pool of brown water at the end that stops the ride. The excitement was certainly catching! Anisa and Karen ended up going down quite a few times during the next two hours. They went on their own and then partnered up with friends and went down in “trains.” While watching the slide, a common theme of those walking past me on their climb back up the hill was how bruised they felt from their fast slide down the hill! One teacher was already forming a bruise on her forearm. She thought that maybe she broke a blood vessel. One person stumbled on a bump just under the tarp, looked underneath, and behold, a good sized tree limb was in the way! It was then appropriately tossed to the side. One less bump to be had by the next contestant. At times the slides were paused so maintenance could happen on the slope. The main concern was where some people went over the edge and off the intended path, causing more bumps. Then as soon as the work was done, the sliding punishment resumed with much chatter. 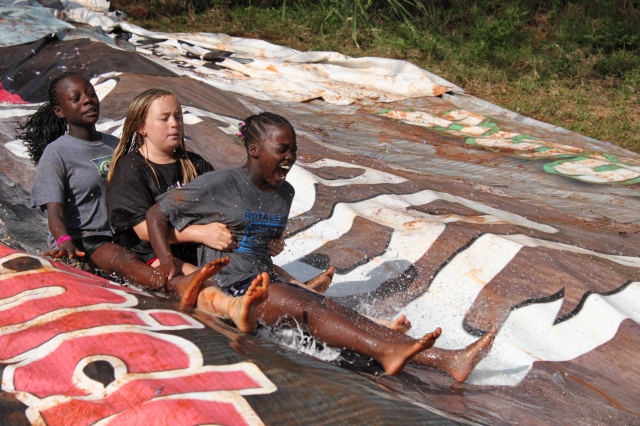 both heading downhill for more fun and punishment

Tuesday, one day later, some people chose to share about their prizes from the event. One staff member said both of his forearms had swelled up Monday night so badly that he looked like Popeye! Another said their knees doubled in size. John said he had what felt like some bruised vertebrae and tailbone. But along with the statements were smiles, shakes of the head, and exclamations like, “Only in Kenya would you do something like this. Anywhere else it wouldn’t be allowed because it wouldn’t meet safety codes!” 🙂 Crazy stuff. The stuff of memories. 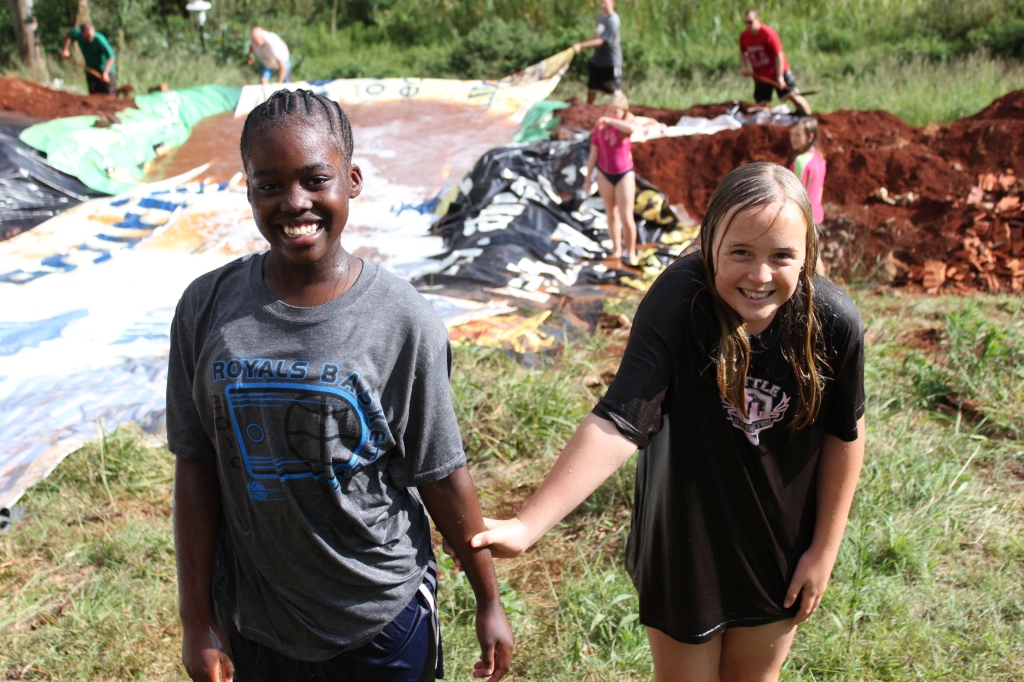 Written by Glenda, Pictures chosen by Anisa and Glenda