At the end of the basketball season, Karen hit a free throw to win a tournament. A couple weekends ago, Karen and Anisa were at RVA for the end-of-season soccer tournament. Would lightning strike twice?

No matter how the tournament ended up, the season had already been a success. The team was undefeated, and they had outscored their opponents 51-4 in the regular season. Of course, it would be great to end with a tournament win.

RVA uses small fields and goals, and the length of the games was only 15 minutes, running time. The team would have to use precise passing, and attack from the beginning.

In their first game, they tied RVA A 1-1, with Joanne scoring the goal. They then beat WNS 2-1, with Karen scoring both goals. She scored the second goal with less than 45 seconds left in the game. She chased down a cleared ball in the offensive corner, turned, took one dribble, and ripped a shot that went through the goalie.

In the third game, they slipped past ISK 1-0, with Karen scoring the goal. Then they beat RVA B 2-1, again with Karen scoring both goals, the last one on a breakway down the middle, on an Anisa leading pass. The goal was scored with less than a minute to play. Then the team beat Rosslyn B 1-0, with Anisa scoring the goal. So far, so good- the team finished first overall, and received a bye to the semi-finals.

In the semis against ISK, the teams were tied after regulation, and went into sudden-death overtime. With about a minute left in sudden death, Anisa passed to Salem, who crossed to Karen, who sent the team to the finals with a hard golden goal past the really tough ISK goalie. On to the finals!

Against RVA A, both teams looked really, really tired. I was tired, and I just watched all day, for pete’s sake. After regulation, no one had scored, and the score remained 0-0 after five minutes of sudden death. So— on to penalty kicks. Coach Jiv won the toss, and asked that Rosslyn shoot second.

Once again, I found myself biting my fist, wondering if my daughter would come through in a situation that I would most certainly have failed at when I was her age. Anisa was standing with Coach Jiv, and cheered when RVA missed, but then sobered quickly when she realized that she could win the game. 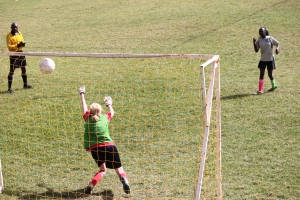 When the ball hit the back of the net, Anisa turned, gave a double fist pump, and ran to the team to celebrate. Karen got to her first, and the team had a little scrum of celebration. 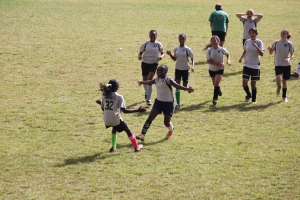 Another awesome season in the books, and another amazing end to a tournament for the Leonard family. Whew! 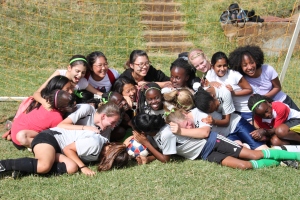