A Week at Camp Bluesky 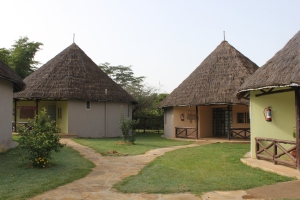 Bluesky at the Lukenya  Cliffs. We left on

Sunday on a Rosslyn bus with all the other campus kids who were going to camp, along with some of my classmates.  After waiting in line for registration and having to fill out the medicine forms which for me and Karen took like 4ever,

Waiting in line for registration with friends

we got our cabin groups. Karen and I were in separate cabins because we requested to be far far away from each other.  That didn’t work out because our bomas (aka cabins) were right next to each other because we were in the same mountain group, Meru. At Camp Bluesky they seperate the kids in to mountain groups, and junior and senior camps. All the mountain groups are named after mountains in East Africa. The older kids get the biggest mountain, and the mountains get smaller the younger the kids. We were also separated by junior and senior camps.  Longonot, Lenga (boys), Suswa, Satima(girls) were junior camp. Meru, Kenya(girls), Elgon and Kilimanjaro (boys) were senior camp.

Anyway, after getting to our cabins, which were really circular hotel rooms with bunk beds, we had mountain group time where all the Merus got together to learn names, except all the Merus went to Rosslyn so we all knew each other and were super good friends.

Finally after what felt like forever we did our first all camp activity. We got sorted!! No, not to Hogwarts Houses but to Chumvi and Nuru teams. Chumvi is the Kiswahili word for salt and Nuru means light. I was a Nuru so I got to deck out in blue while all the chumvis got stuck wearing red.

My cabin, with counselers Chloe and Rachael

Over the week at camp we did many fun things. The first full got  day we got to have our first S-W-A-G time, aka “Strong Woman After God time.” All the girls at camp learned our cheers while the M-A-Cs (men after Christ) learned there’s. One of them included pointing to their ribs and yelling give  it back.  One of ours included saying X we don’t need no Y, over and over.

We also got to do skills 3 times during the week, Monday, Wednesday, and Friday. We got to pick what we wanted between art, soccer, b-ball, partner dancing, outdoor living, Frisbee golf, swiming and archery. Karen and I did partner dancing and soccer but then I did outdoor living while she did arts and crafts. On the days we didn’t do skills one day we did high ropes where we had to cross a wire with a partner, and the other day we went rock climbing on Mt.Kenya which was super fun. The bad part was that we missed rest time.:( 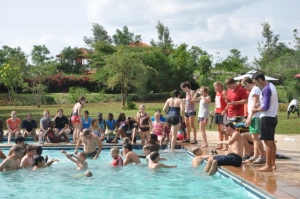 Each afternoon after S-W-A-G, lunch, and rest time (my favorite part of the day) we played an all camp game. On Monday we played castles where you have to knock cones off the ‘castle’. The next day, Tuesday, we had Madji(water) relays

where we all got soaked. Throughout the week we also had a sports day, Slop Olympics which is my favorite, but also sort of gross because we had to do a sack race and eggs, jelly, fish(with the eyes still on), bananas and like every other gross thing inside the sack. We had to dip our heads in flour while bobbing for M’n’Ms and we had to lick ice cream off the plate one by one in our groups. The last full day, Friday, we had Sock war where you pelt each other with socks trying to send the opposing team to jail. It was Chumvi against Nuru like all our other camp wide games.

After that we would always have mountain group time, followed by dinner assembly where we sang silly songs such as the canoes song, and little cabin in the woods and many others. Later, well filled from a spectacular dinner, we would head down to Tsavo for a evening of games followed by a devotional. 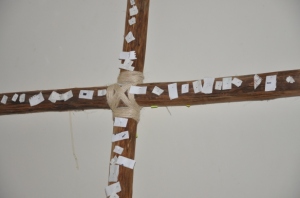 The cross with our sins nailed to it

Each night after Tsavo there was something special: one night there was a rodeo where we learned to square dance and did a whole bunch of other westerny things with fake animals. The next night we had Mission Impossible, where we had to sneak around in the dark and go through all the hard obstacle courses. In one I even had to jump in the pool with my clothes on! The only good part was that we got to have smores! The next night in Tsavo the counselors  acted out the crucifixion. We then went and prayed with our mountain groups followed by a hour or two of star gazing and praying. On Thursday we had an all camp Disney themed talent show.  All the Merus did “Part of this World” from The Little Mermaid. The Mountain group that won was Elgon. They did “A Whole New World” from Aladin. They dedicated it to Meru  because we are the same age. They had been trying to impress us all week by writing I heart Meru on their stomachs and drawing fake abs.

The last night was my favorite- we had Summit Fires where we go to the bonfire  and there were a lot of buckets on fire surrounding us along with a lot of torches. ‘Jesus’ is praying at the cross when the ‘Devil’ comes out and they have a fight with lit torches of fire and knock and pin each other down with it. The rest of the night was fun though we did cheers and a lot of girl against boy games (the boys won).  We then had a party to send off the Lions Pride attempters. You have to be going into grade nine to do it and you have to keep a fire going all night, then run up hill five miles and you can’t let the counselor pass you, and finally you have a hour to write a 500 word essay saying why you chose to try Lion’s Pride and the memory verses you learned doing the night. You are also not allowed to talk the whole night and if you do or are not able to

complete any of the tasks you are out. Oh, by the way, out of the 19 years of camp only 11 people have made Lion’s Pride and only one was a girl. 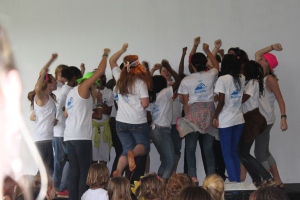 We, Merus doing our cheer at closing ceremony

The next day the parents came and we had the closing ceremony followed by good byes.

Overall, it was a good week, and we had a lot of fun!

1 Response to A Week at Camp Bluesky